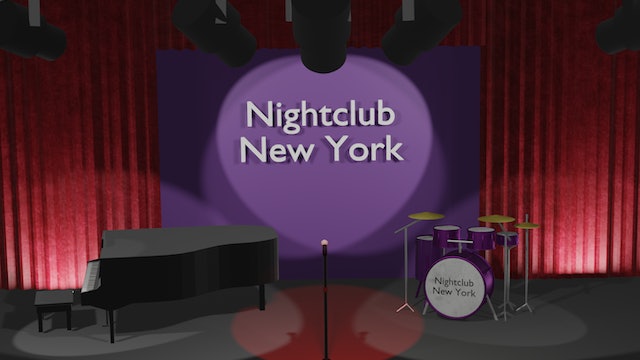 NYC impresario Scott Siegel has conceived a revolutionary new
concept: NIGHTCLUB NEW YORK! It is the first and only
nightclub that will make New York’s enormous pool of talented
performers — most of whom are currently out of work — available
to the entire world!

AND ALL TALENT WILL BE PAID!

Subscription based, NIGHTCLUB NEW YORK will be the
equivalent of a Neflix for musical performances by New York’s
Uber-talented musical theater and nightclub stars. For a modest
monthly fee, subscribers can enter the nightclub at any time and
watch anything and everything in the nightclub they choose with
their own personal code. And new entertainment will be regularly
added to the already impressive line-up of talent.

The official Grand Opening of NIGHTCLUB NEW YORK is on
November 16th at 7 PM. The club will open with an extraordinary
array of talent — more than 35 major stars in 20 different shows
ranging in length from 15 to 30 minutes! This initial list of stars
and their performances offer a special treat: they have been
culled from never-before-published archival footage and will be
shown with the permission of the performers.
(See further below for Nightclub New York’s initial list of stars.)

Founding Member monthly subscriptions to NIGHTCLUB NEW
YORK will be $50 (which works out to just $2.50 per show!, per
month — we will add another 20 new shows every month).
PLUS: Founding Members - buy the first month, get the
second month FREE!

[Your subscription will renew every month unless you choose to cancel (but we hope you won't).]

Scott Siegel, the club’s creator and host, says,”Nightclub New
York offers, by far, the best price for the most talent one can hope
to find!
“Plus," Siegel added, “there will be exciting perks for those who
want to support the club and help its efforts to both pay
performers and make Broadway music (and its many musical
cousins) more available to the world. There is a GoFundMe
campaign simply titled “NIGHTCLUB NEW YORK” where, for
different donations, one can have one of the club’s virtual
showrooms, its wine cellar, or one of the club’s private bars
named for you; most helpfully, you can sponsor one or more of
the concerts in the club!”
Go to GoFundMe.com and search for NIGHTCLUB NEW YORK
to make a donation and pick your perk(s)!

Here is the initial list of stars who will be performing in
NIGHTCLUB NEW YORK as of our Grand Opening Date of
Monday, Nov. 16th:

And Remembered Performances by the late…
Ray Jessel (Songwriter/singer of “The Penis Song” and more!)
Baby Jane Dexter (Nightclub Legend!)

Right-click this and copy the link address.

Watch on your Television

Watch on your Computer